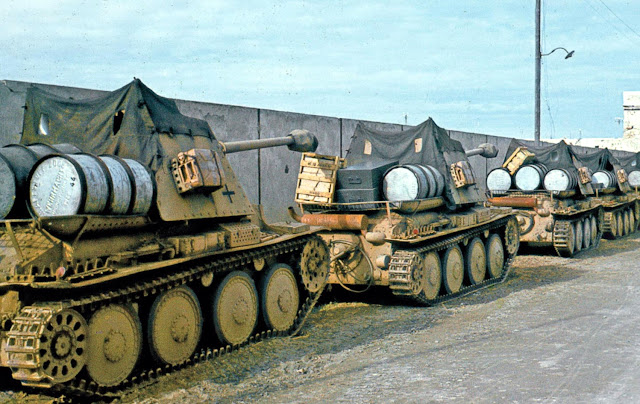 Rare Colour Picture of German Marder III (7.5cm PaK40.3 auf PzKpfw 38(t) Ausf H – Sd.Kfz. 138 Model) Tank Destroyers in Tunisia. Probably newly arrived and prepared to be sent to the front packed with gasoline drums and jerrycans. An unknown number of 7,5cm Pak40/3 auf Pz.38(t) Ausf.H (Sd.Kfz 138) did make it to Tunisia, and the only known units thus far to be known to have this vehicle was the 2.Kompanie / Panzerjäger-Abteilung 39 and the schwere Schwadron / Panzer-Aufklärungs-Abteilung 580. There is another image title “North Africa-unknown date. Vehicle captured in Tunis” on page 24 of the Zimmerit Press booklet by David V. Nielsen entitled ‘Panzerkampfwagen 38(t)’ which shows a 7,5cm Pak40/3 auf Pz.38(t) Ausf.H (Sd.Kfz 138). There appears that the DAK palm tree is located on the right side of the front plate and on the left there is a tactical symbol that looks like the front of an elephant’s head. While the tactical marking, is for a Kavallerie Aufklärungs-Abteilung. It seems that units of the 90. leichte Afrika-Division carried some variations on the elephant theme of troop markings, (i.e. the 7,62cm FK auf SdKfz6, w/ H.Pz.Jg.Abt.605 etc.), so it is possibly belongs to the Panzer-Aufklärungs-Abteilung 580.BTW, an excellent reference on how the shade of RAL8000 looked like on the Hull and Wheels, RAL8020 on the Jerrycans, in addition to their fuel stowage!

After the failed Italian attack on the British positions in Egypt, Mussolini was desperate to convince Hitler to send military aid to his shattered forces in Africa.

Initially, Hitler was not interested in the Mediterranean. He reluctantly decided to help his ally and sent an armored force under the leadership of Erwin Rommel.

The Germans quickly found out that, beside the famous ‘88’ (88 mm Flak gun), the standard 3.7 cm and short 5 cm anti-tank weapons struggled against the well armored British Matilda tank.

A number of captured and modified 7.62 mm PaK 36(r) guns were also sent to the North African front. One great issue with this weapons was the low mobility on a front were speed was essential for success. Several solutions to this problem were tested, like the Sd.Kfz..6 armed with the 7.62 mm PaK 36(r) in a box shape casemate and the experimental half-tracks armed with the 7.5 cm L/41 gun.
Before sending the new Marder to Africa, it was necessary to adapt them for service in the African desert. In March 1942, one Marder III was equipped and tested with sand filters. The tests were successful and later vehicles sent to Africa would have these filters. The number of vehicles sent ranges from 66 to 117 (depending on the sources).

The first Marder IIIs (6 x Panzerjäger 38(t) für 7.62cm PaK36(r) – Sd.Kfz. 139] arrived to North Africa in May 1942, with the last one arriving in November 1942. The freshly arrived Marder IIIs were used to reinforce and equip anti-tank battalions of the 15th and 21th Panzer Divisions.

By late October 1942, the 15th Panzer Division had at its disposal some 16 Marder III [Panzerjäger 38(t) für 7.62cm PaK36(r) – Sd.Kfz. 139]. All were allocated to the 33rd Anti-Tank Battalion, together with a number of towed 5 cm PaK 38 anti-tank guns. After the British attack at El Alamein at the end of October 1942, the 33rd Anti-Tank Battalion was under a heavy attack. It managed to inflict some heavy damage to the British advance units but it also suffered losses. Almost all the Marder IIIs were lost, except one.

In September 1942, the 39th Anti-Tank Battalion of the 21st Panzer Division had around 17 PaK 38 guns and 18 Marder IIIs divided between two Kompanien (1st and the 2nd). There is little information on this unit’s participation in the Battle for Alam Halfa (October-September 1942). In late October 1942, during the British counterattack at El Alamein, all 18 Marder III vehicles were reported to be still operational. By the 25th of October, this unit was pulled out into reserve. The next day, the 2nd Kompanie was sent to the north to help stop a British attack while the 1st Kompanie was located to the south.

By the end of October, the 39th Anti-Tank Battalion was heavily involved in fighting, trying to free some encircled units of the 164th Light Division. On the 4th of November, the surviving German forces were forced to retreat. The 39th Anti-Tank Battalion lost all its Marder IIIs and had only a few 5 cm PaK’s left. By December, the 21st Panzer Division had only two Marders III, which were not even fit for action.

The 10th Panzer Division was sent to the North African front in November 1942. In Africa, this unit was engaged in many battles against the British and newly-arrived American forces and the losses were heavy. The last Marder III was reported lost in March 1943.