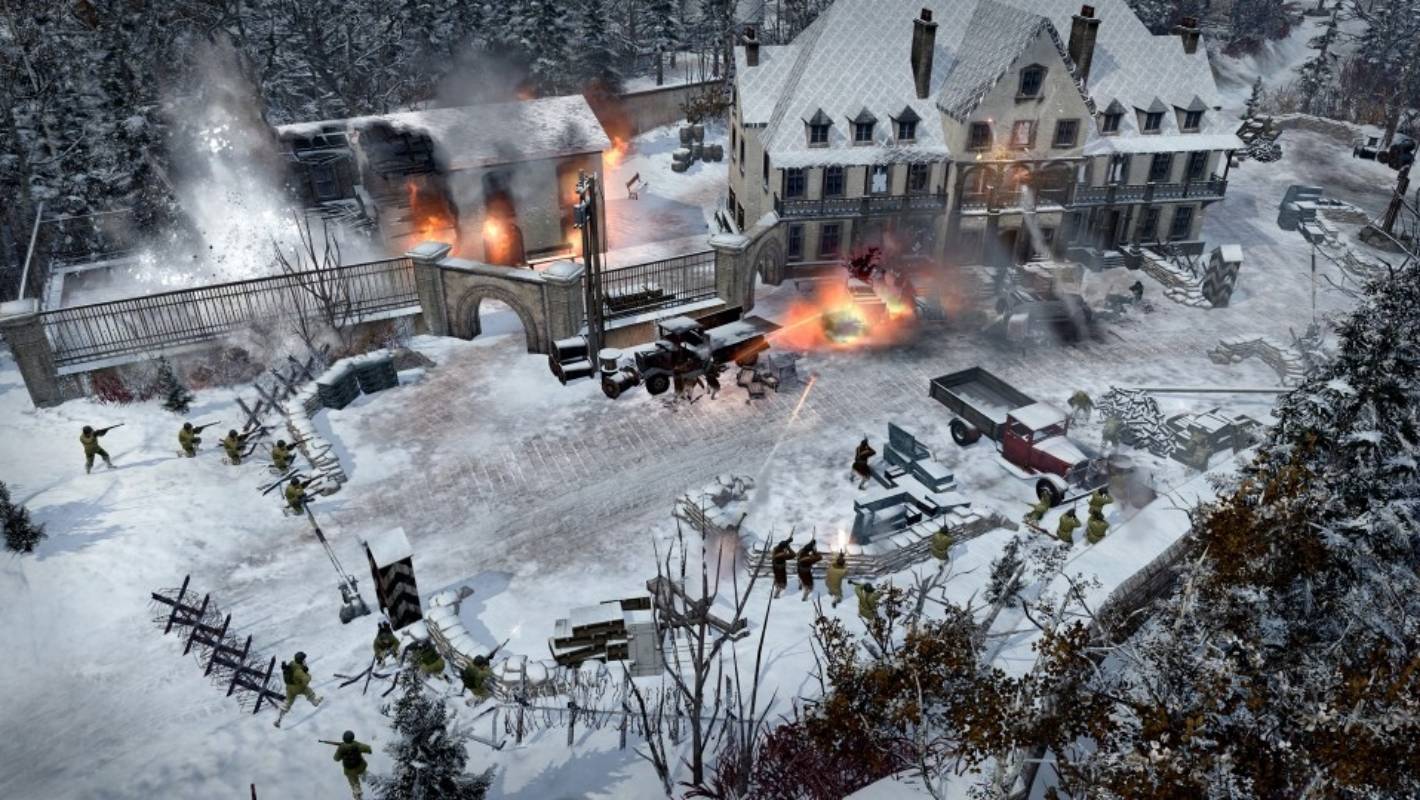 Relic’s Company of Heroes 2 was a satisfying take on the RTS genre, set in World War II. Giving Soviet soldiers orders to flank enemies, hole up in buildings, and capture points was a change of pace from the typically fantasy-based games dominating the genre.

Now playing the Allies, you’re tasked with cutting off the Nazi war effort in The Battle of the Bulge.

If you’re expecting a complete change from the original game, you’re not going to get it, but there are enough variations to make Ardennes Assault an accomplished attraction.

Here you’re given a meta-map of sorts to weave your three companies across. Moving one of your companies into a new area casts you into a new battle where the action takes place.

What’s interesting is how the skirmishes and the larger war play against each other.

If you lose too many troops on the ground, the Nazis can regroup even stronger in later areas. It’s even possible to lose the campaign, forcing you to start again.

You have to be careful not to mismanage your three companies and avoid letting them die against the Nazi brick wall.

The three companies have different personalities, with unique skills and upgrade trees.

There are four available to choose from, although the Rangers are unfortunately held behind a paywall.

As you progress through the 18 missions, each of the companies will gain levels and potentially lose troops. The upgrades typically make reinforcements cheaper or faster and help to keep the Allies on an even footing against the Nazis.

There are three difficulty levels too.

Easy allows you to blast your way through head-on, but higher difficulties require finesse and a mind for the battlefield. You quickly realise you need to use particular troops deliberately. Bunkering in buildings, making the most of flanking, and creating defensive positions are all essential skills to learn.

Each mission feels like a battle of wits. Some involve you holding a position for a set period of time. Others want you to defend troops or keep a path open to aid the supply of your allies. The decisions you make on the tactical battlefield will either prove you successful or leave you begging for mercy.

For those new to the series, Ardennes Assault is pretty accessible. It’s standalone so you don’t need the base game to play.

An in-depth series of tutorial videos are available, but you can pick up most of what you need to do throughout the campaign.

It’s pretty easy to figure out what you need to do with your troops, but visually the game is at first quite complicated.

UI of various types fill up almost a third of the screen. Soldier numbers and health are up in the top right, there’s a minimap on the bottom left, and troop info, actions, and your command ability level are all sprawled across the bottom of the screen. Over time you get used to it, but to the untrained eye it can be overwhelming.

I wouldn’t say the graphics are any better than the base game, but Company of Heroes 2 already looked great.

The bird’s eye view of a World War II battlefield is animated in pretty intricate fidelity. The way the soldiers are presented commando-crawling over the snowy hills brings life to the hectic action.

Unfortunately, there are essentially no graphics options for those with beefier PCs. You can change the brightness and unit occlusion levels, but there’s no ability to change texture detail or anti-aliasing or anything of that sort.

Company of Heroes 2: Ardennes Assault is out now and I’m glad it is. The World War II RTS adds something new to the series with the meta-war going on.

The persistence across campaigns makes you feel like you’re really participating in an active war.

How well you hold up against the Nazi forces proves you as an adept officer of war.

The voice acting and in-game chatter adds greatly to that experience. It’s only a shame that the PC is left with so few graphical options.

Ardennes Assault makes up the difference with excellent campaign structure and the interesting quirk of the meta-war.

Is Ardennes Assault worth it? :: Company of Heroes 2 General Discussions