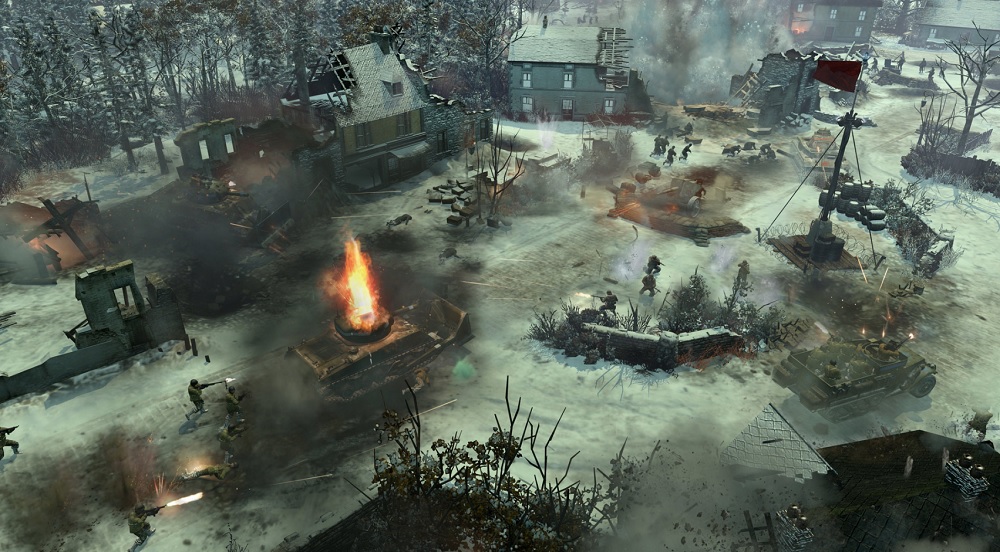 Check out our Reviews Vault for past game reviews.

All is not quiet on the Western Front.

Sega’s Company of Heroes 2: Ardennes Assault (available now for Windows PCs) depicts the Battle of the Bulge in World War II, which represented Adolph Hitler’s last stab at glory after the successful Allied invasion of France. Hitler launched an all-out tank assault with more than 400 tanks and nearly 300,000 soldiers in a surprise attack in the Ardennes forest of Belgium in December 1944. The attack created a giant bulge in the American lines, and it’s your job as the American commander to close that bulge amid difficult conditions in the middle of winter.

I relived that battle as commander of three fictional U.S. Army companies — Able (airborne), Baker (mechanized), and Dog (support) — in the real-time strategy game. Ardennes Assault is the latest extension of Relic’s Company of Heroes 2, which debuted last year with a focus on the chilly Russian front. Relic followed that up with Western Front armies for multiplayer play this summer.

I have long been a fan of this series, which first debuted eight years ago, as a perfect mix of state-of-the-art graphics, fast-action real-time combat, and the drama of history. And the final game lives up to my high expectations. By and large, it does a good enough job of balancing historical accuracy and fun. 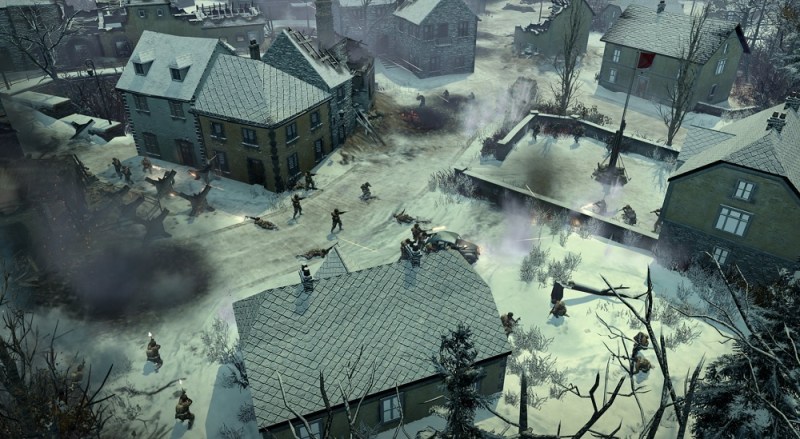 It’s a full game, not just an expansion

Relic is releasing what is effectively a whole new game, a standalone expansion based on the Company of Heroes 2 game engine.

As with the earlier games, you play from a top-down view of the battle, with squads of soldiers at your command. Amid the chaos of simultaneous enemy movement, you must dispatch your squads to capture strategic points on each map in order to get more resources. You can use those resources to create more tanks, half-tracks, infantry squads, or special weapons crews. As the battle spreads across the map, you wind up having a lot of juggling. Add to that the difficult of “fog of war,” as you can only see the sections of the map where your troops have a line of sight. That makes for a lot of ambushes and rude surprises.

The game has 11 new missions and seven engagements set in Belgian towns such as Bastogne or Houffalize. Altogether, it has 18 maps with lots of replayability and bonus goals.

The action starts with the initial German push into the Ardennes. You play the American side, and must push the veteran German troops back one map at a time.

Company of Heroes has the right level of abstraction. It isn’t a dry war game focused only on strategy, and it isn’t a first-person shooter where a single soldier can win the entire war. You fight with a top-down view of the action, but you can order a squad to toss a grenade at a particular target at just the right moment.

The game presents you with the tough decisions of commanders who have to coordinate their assaults just right across a bunch of squads, but it also shows you what is happening on the battlefield with individual vehicles and soldiers. You can see the sacrifices they make, and you can hear the blood-curdling screams when you make the wrong decision. My squad leaders kept sending reports back, shouting “We just lost a medium tank!” or “Grenade!” They let me know “We’re getting hammered here” whenever they were under fire.

If you spread your forces out, you can cut off the supply lines of the Germans and win more easily. But if there’s a firefight, you want to make sure you have enough concentrated firepower to win.

With the ambient battle chatter of the soldiers, Relic shows you what it’s like to fight in a chaotic battle. Nervous silence gives way to the crackle of gunfire. Soldiers scream when they are hit, or they lie pinned on the ground when machine gun bullets are flying overhead. If an artillery barrage lands in your midst, the soldiers that aren’t killed will panic and run.

Your job as commander is to order your troops around so they do the ambushing, rather than the other way around. If one squad is met head-on with an enemy squad, you have to quickly maneuver another squad to flank the enemy and cut them down. The action is furious, and your soldiers will pay the price if you aren’t multitasking properly. They will also act on their own, firing as enemy troops come into view, or running when the squad is in full panic.