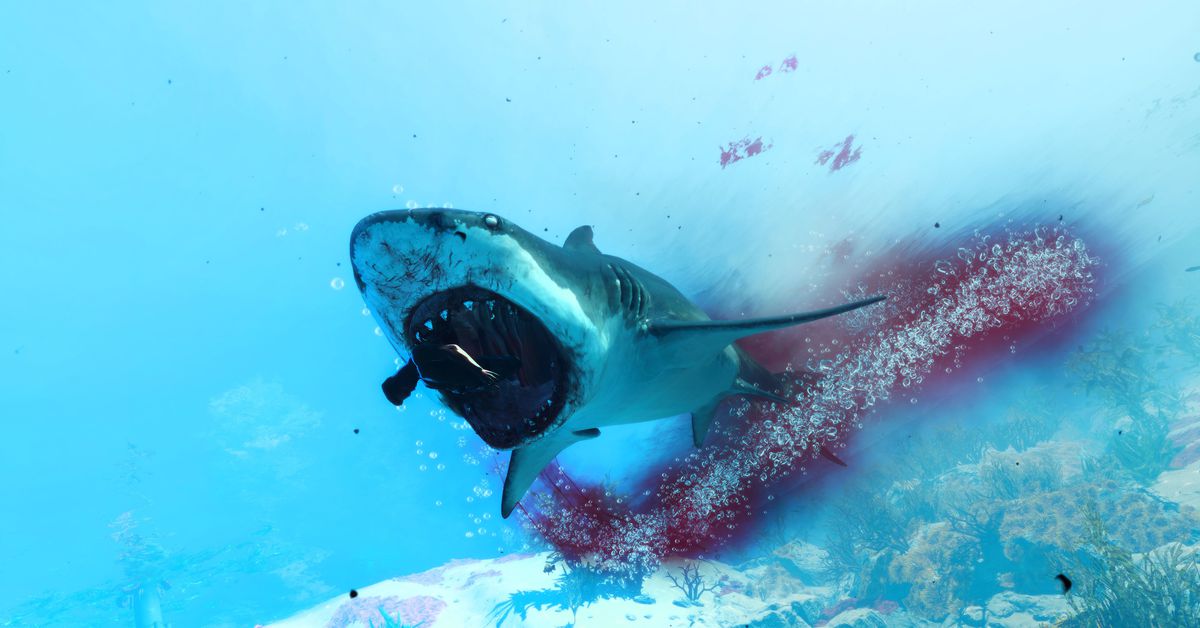 Hello, I am Shark.

I was cut from my mother’s womb by a shark hunter on a reality television show many years ago. He stabbed me. I ate his hand. I have been told this is my Motive, that I seek revenge.

Sure. Maybe. But if I am being real with you, I just want to eat. I don’t need Motive. I am Shark.

I always want to eat. Fish. Seals. Dolphins. Other sharks. And, of course, people.

One day, I ate a woman in a lab coat carrying a journal marked “Science.” The journal said sharks rarely eat people. I learned that journals are boring, and add nothing to the flavor of people. I eat people, and people are good to eat.

I wake in my grotto each morning and begin my daily cycle. I eat, grow, evolve, find new areas with fresh meat so I can repeat that cycle, and then I do it all again. This cycle has been good to me.

As a baby shark, I could barely eat a turtle, let alone leap into the air. But the more I ate, the more I grew, the more I could do, and the more places I could visit. Bayous! Resorts! The Gulf! I am big, and yet, the world is bigger. I am Shark, yes, but I am also introspective.

Soon I became a teen. I could jump 15 feet through the air, catch a grouper in my maw, and swat my tail into puny humans, sending them on a free vacation into the horizon. This was an awkward time for me. On one fin, I was eating more people than ever. On the other fin, I was still too small to go everywhere I’d like.

I am now an Elder shark, and I go anywhere and everywhere. I am so very large, like the shark in 2018’s surprise box office success, The Meg. After a day of gnashing and noshing, I return to my grotto to improve myself, both figuratively and literally. Rest is important. And so is upgrading. My jaw will electrocute a school of mahi mahi with a single chomp. My fin now turns to stone and cuts through sailboats like a sword through a sheet of paper. My tail releases poison.

All in all, life in the waters is good these days. I swim with the grace of a dolphin and the speed of a cheetah. However, when it comes to attacking fish and humans and itty-bitty baby seals, I will confess I am quite clumsy. It can be quite annoying at times for me to lock onto my prey. I am unrefined, but that’s OK, because if I keep chomping and chewing, nothing will survive my appetite.

When I do get ahold of my targets, they squirm and wiggle. Often this is funny, like I’m pulverizing crash test dummies. But occasionally I remove a leg or an arm from a human, and they cry for help, hobbling away toward what they hope is safety. Even for me, Shark, this is too much. I prefer to eat humans when they look like cartoon characters, not victims in an ICU.

This is how all sharks live, yes?

Frankly, I do not know. The few sharks I have met, I ate for their precious meat. You see, self-improvement requires self-reflection, but also lots of resources, like protein, fats, and minerals. The waters are fortunately thick with fish and flesh, so I am never for want.

I love menial tasks. Each day, I look for giant license plates floating in the air above the water or hiding in bioluminescent caves. This gives me purpose. As does the voice in my head. It tells me to eat 10 fish in a certain dirty cove, so I eat the fish. The voice says to eat 15 people outside a condominium, so sure, why not. I was going to eat people anyway.

Every so often I find the direction of this voice a bit crass, like when it tells me to eat homeless people, and I say, “Really? Haven’t they been through enough? That is biting down.”

But for the most part, the voice has a good sense of humor about what I should and shouldn’t consume. Mostly, the other fish and the human global elite.

The voice in my head never tires of things for me to do, and while most of them lack challenge, they keep me swimming. If I get tired of eating however many sea turtles the voice asks of me, I can always go in search of landmarks or focus on self-improvement. So many upgrades, so little time.

I confess to you that when I, Shark, look at my broken reflection in the abandoned submarine in my grotto, I wonder what type of book would capture my life. Does this make me a narcissist? I think it’s a revenge fantasy. Not against the shark hunter who killed my mother. I would never be so literal. I am Shark, but I’m not void of culture. No, my life story would be a revenge fantasy against climate change deniers, these people who destroy my home by polluting it with oil and trash. They are why I improve myself. So that I may better destroy their ever-larger hunting boats that puke smoke and gasoline.

That reminds me: one time I ate a man carrying a book called The World Without Us. I spent many hours in my grotto reading this book while removing his bones from my teeth. Did you know that if humans were to disappear, nature would rapidly reclaim the planet, restoring Gaia to its true state? This is why I eat.

Maybe this is my Motive?

It feels good to be a “thoughtless” creature of hunger and rage. You know those novelty rooms humans visit, where they put on protective gear and break stuff with baseball bats and sledgehammers. That is me, that is my life.

Some humans intend to interfere with my fun. If I eat enough beachgoers and destroy enough of their tacky boats, then a supposedly “talented” hunter is alerted to my whereabouts. But I will remind you that my teeth are made of lighting; my fin, of rock; and my tail, it spews poison. I can jump 40 feet in the air, and bat a human body like Mark McGwire in the surprise home run bonanza of 1998. Hunters are playthings, not legitimate adversaries.

These humans, they amuse me. They have covered the floor of my rivers and sea with references from the 1990s. I can’t imagine how much they invested on these aquatic sculptures to box office bombs like Waterworld and Demolition Man. I don’t know how they expect sharks like me to get obscure references to Roger and Me.

But hey, I am Shark. I am no expert in these things. I leave art to the experts until I can pursue Art History degree via online courses.

Yes, I know there’s a lot of bad in this world, and sadly eating humans won’t actually fix that. So I treat every day like a squeeze toy or a fidget spinner. My life is one big distraction, and that is OK. I’d go so far as to say my life is best when I keep things simple. I have plenty of interesting places to visit, things to eat, and ways to improve myself.

Yes, when I look upon the shores, I think, “Oh dear, what a terrible time to be human.” Thank goodness I am just Shark. And I am hungry.

Maneater will be released May 22 on PlayStation 4, Windows PC via the Epic Games Store, and Xbox One, and later this year on Nintendo Switch. The game was reviewed on PC using a final “retail” download code provided by Tripwire Interactive. Vox Media has affiliate partnerships. These do not influence editorial content, though Vox Media may earn commissions for products purchased via affiliate links. You can find additional information about Polygon’s ethics policy here. 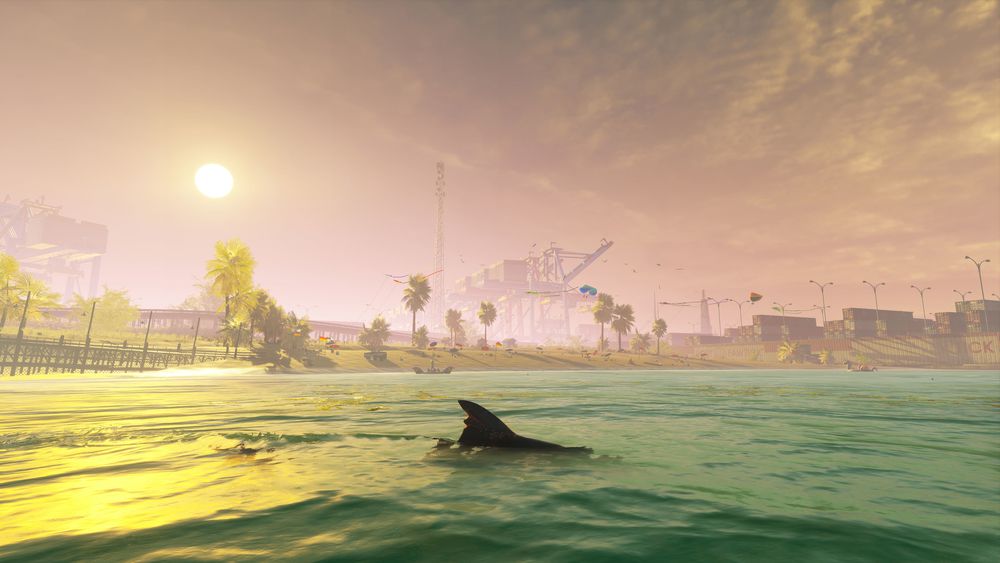 In Maneater, a “shaRkPG” from Tripwire Interactive, play as a shark that gets revenge on humanity by … eating people. A lot of people.

The best WW2 games on PC