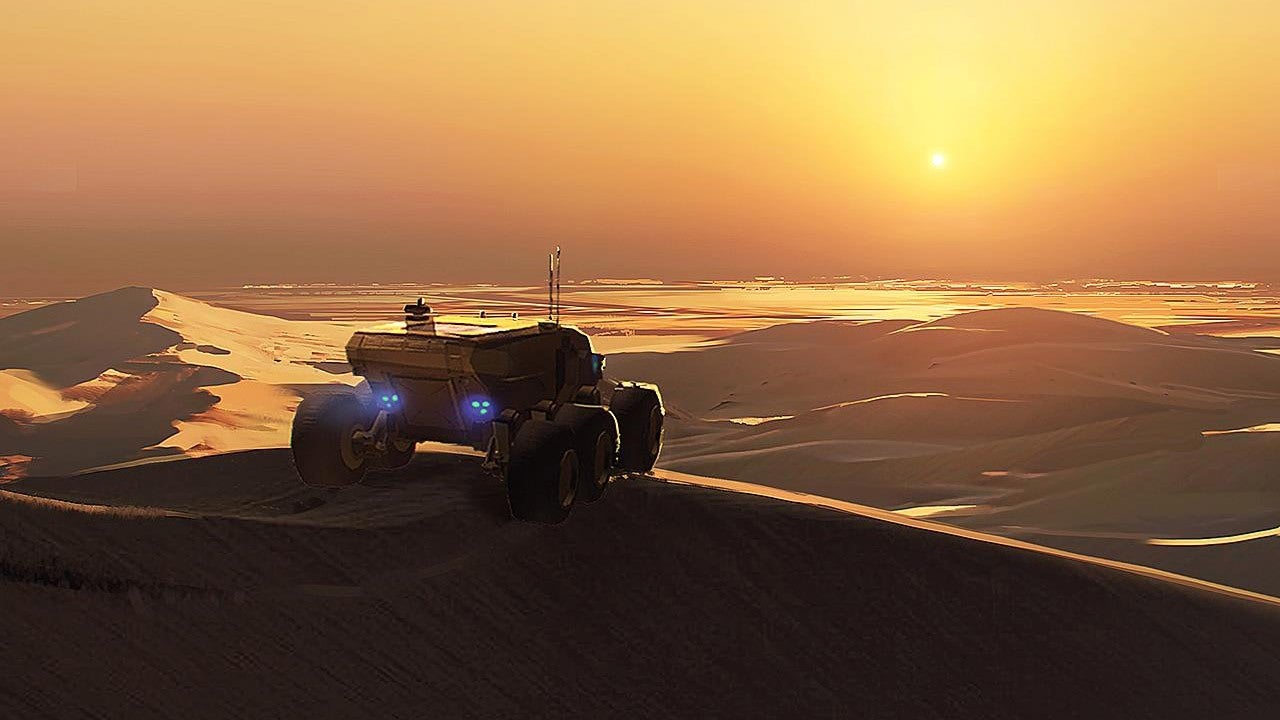 Playing Homeworld: Deserts of Kharak is like settling into a comfortable, old easy chair, taking a sip of a fine whisky, and ordering a zillion tanks to blow the ever-loving crap out of all that stands in your way. Despite being planet-bound, in contrast to the series’ previously spacefaring backdrop, the high-level real-time strategy mechanics felt familiar and intuitive (especially if you’ve recently revisited Homeworld 1 and 2 by way of the Homeworld Remastered Collection). I was able to get my bearings very quickly and develop an understanding of the different unit types and core controls with minimal fuss, and get right to enjoying highly entertaining multiplayer and a downright blast of a campaign that scarcely sags in excitement and engaging, ever-evolving combat from beginning to end.

Watch the first 28 minutes of Homeworld: Deserts of Kharak above.

The campaign story isn’t mind-blowing, but it is a clever and fresh sci-fi scenario that ties into the larger Homeworld universe by expanding on the discovery of the ancient technology that enabled a return to space, referred to in the opening of Homeworld, and it does it in some unexpected ways. The voice acting is of the highest caliber, from the determined scientist heroine Rachel S’Jet, to her dedicated sub-commanders, to the mysterious religious fanatics that opposed me every step of the way.

Unfortunately, due to the inherent limitations of the RTS genre, these characters don’t have enough opportunities to interact, emote, or develop beyond their initial archetypes. And while the cinematics have a great painterly style that nods back to Homeworld’s amazing animatic sequences, many of Deserts of Kharak’s major plot points are revealed in underwhelming, infodump monologues and post-mission briefings. There are a couple really memorable moments of in-engine, “Show, Don’t Tell” storytelling, but they’re too sparsely sprinkled through the 15 or so hours of the campaign.Every contact with the enemy is accompanied by the crisp and satisfying zap railgun fire.

The fast-paced tale and bombastic battles are complemented by a moody, subtle, Arabian-flavored score and great sound design. Each moment of narrative revelation is backed by arrangements that highlight the plight of the Kapisi’s beleaguered expedition. Every contact with the enemy is accompanied by the crisp and satisfying zap railgun fire, an atmospheric, warzone staccato of automatic weapons on smaller craft, and satisfying, bassy explosions indicating that your larger ordnance has found its mark.

Amidst all the light and sound, I quickly felt proficient in commanding my army, but that isn’t to say this game is lacking in challenge or complexity. The diverse scenarios thrown my way were often desperate, frantic, and full of unpredictable shifts in pace and initiative. The arrival of enemy reinforcements could suddenly make a “safe” map fraught with peril, whereas an opportune assist by a computer-controlled allied force could spin a desperate holding action on the last defensible ridge into a triumphant counter-charge. There’s a give and take that prevents most missions from feeling like simply chipping away at objectives. As I navigated my massive, tank-tracked desert carrier, the Kapisi (a stand-in for the motherships of classic Homeworld), I often had to balance the risk and reward of delaying completion of objectives to gather more resources — a proposition that often meant prolonged engagements and a cost in casualties greater than what I gained in equivalent raw materials. When your surviving units persist from one mission to the next, those decisions gain tremendous importance.

Yet despite these circumstances, the 13-mission campaign never felt frustrating, overwhelming, or unfair. On normal difficulty, the AI showed just the right level of aggressiveness to keep me – a first-time player with Homeworld experience – on my toes (or even the back foot in some missions) without feeling like an insurmountable tide. But the really outstanding feature that makes Deserts of Kharak a joy to play is the tools available to me as a general: an excellent strategic overlay (inherited and impressively updated from the original games) and versatile, no nonsense unit controls.Kharak is an attractive world, if a bit one-note in its sandy, sweeping environments.

The enhanced strategic view, which zooms out dramatically to show the entire large-scale map battlefield, is a superb information display that offers a comprehensive look at any area of the battlefield within sensor range of your units, with easy-to-read icons representing friendly and enemy units that boils down the chaos of battle to its most basic elements. I ended up playing most of the campaign in this view, which felt great, but made me feel a little guilty for skipping over the graphics — Kharak is an attractive world, if a bit one-note in its sandy, sweeping environments. But I whenever I felt I was missing out, a quick tap of the space bar allowed me to enjoy a up-close, explosion-filled highlight reel of any engagement going on before I zoomed out again to get back to business. Diverse, tactically specific audio cues also alerted me to things going wrong in places where my attention wasn’t, like a small and under-equipped resource-gathering detachment facing the wrath of an entire battlegroup. That was a godsend to someone with as severe a case of tunnel vision and poor minimap awareness as myself, playing a game with so much going on at once.One quirk is that the strategic overlay also does a poor job of communicating which units have anti-aircraft capabilities. Air units become pretty important in the mid and late game, and some unit types can gain anti-air through an upgrade without changing the symbol that represents them on the overlay. Getting your bombers shot down because you didn’t look closely at a tank model is annoying.

The unit war chest that slowly expanded throughout the campaign allowed me to create extremely varied and specialized army compositions. On the early missions, I deployed a lot of expendable, light vehicles in a frontal swarm to draw fire, while long-range, armor-obliterating railguns – a personal favorite of mine – disintegrated the opposition with a sniper’s precision from elevated terrain (which affects range and damage in a nod to classic Homeworld’s full-3D movement gameplay). By the end, I had an impenetrable front line of “Battlecruiser” tanks, supported by vehicles with the repair ability holding the line, while ultra-long-range artillery blanketed the opposition and strike aircraft deployed from my carrier dished the hurt on priority targets from above. Both play styles felt viable, regardless of the mission.The default multiplayer mode rewards build diversity, terrain awareness, and experimentation.

Multiplayer is also very well-done, if a bit smaller scale than I’d prefer. It presents you with a unit cap of 125, compared to the campaign’s nearly 200, which had a notable effect on how I perceived the scale of a battle in a 1v1 scenario. In 2v2 and 3v3, however, there is always plenty going on. The default game mode also rewards build diversity, terrain awareness, and experimentation with an objective-based artifact extraction race. You can still achieve victory by destroying the enemy carriers, but I found that relatively rare compared to being the first team to extract five artifacts from their set spawn points. This objective system puts the focus on the whole map rather than just where your enemy is camped out, and creates much more varied and dynamic engagements than a carrier versus carrier slugfest would.

There is some sand in the gears here and there. I never had trouble on a macro level getting unit groups where I wanted them, but once they were there, I didn’t feel I could really trust them to operate on a tactical level without micromanagement. I was disappointed, for instance, that there’s no way to quickly set the facing of a control group formation with a move order (as you can in other large-scale RTS games like the Total War and Supreme Commander series, or Homeworld developer Relic’s Company of Heroes). Non-combat vehicles often wound up out of position within their control groups, taking fire when they shouldn’t be. Knowing that developers Blackbird have Relic alumni in the lead, I expected less hassle in getting these detachments to behave intelligently.

The Last of Us Part 2 review: We’re better than this

The ‘StarCraft II’ nerds at Shopify now have an esports team