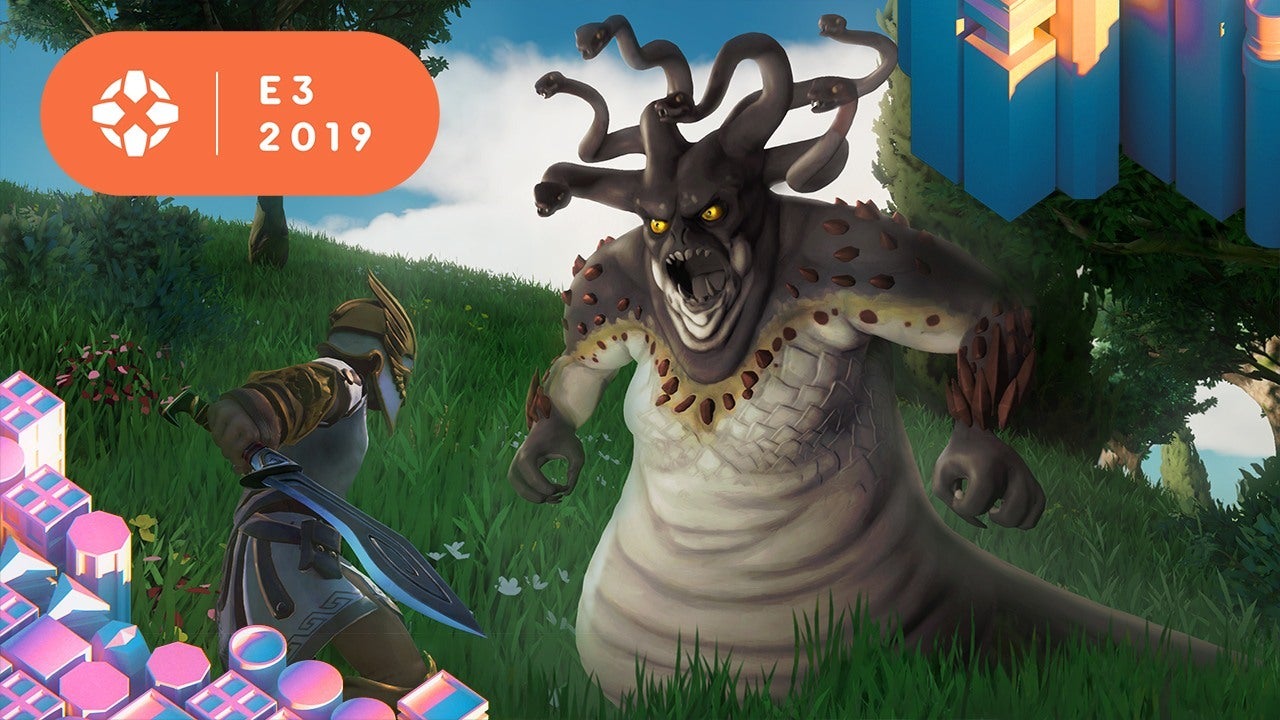 At first glance you’d be forgiven for thinking Gods & Monsters, the newest open-world entry in the Ubisoft catalogue, is a sequel to The Legend of Zelda: Breath of Wild. The playful, welcoming art style, the green rolling hills with an always-inviting horizon, and the small, unimposing hero at its core all bring Nintendo’s 2017 masterpiece to mind. Indeed, when I got the chance to see a few minutes – running via Google Stadia on a Pixel phone – the gameplay heavily evoked Zelda as well. It’s clear that God & Monsters is aimed to appeal to as big and wide an audience as possible, and with that goal in mind, what better game to model yourself on than Breath of the Wild?

Platforming and puzzle solving are pushed to the forefront, which is again an attempt to appeal to as big an audience as possible. You’ll have to master Gods & Monsters’ movement mechanics in order to explore the breadth of the map. Double and triple jumps are at your disposal, as well using an uppercut attack in mid-air to reach higher platforms, all of which is designed to reward exploration and encourage risky traversal. In the demo I saw, Fenyx jumped from a cliff and summoned magical wings out of nowhere to soften their landing, sprinted across a great plain while a small stamina wheel gradually depleted, and then made their way to a series of pillars to engage in battle with a small winged beast. The borrowing of Breath of the Wild’s stamina consumption mechanics will likely limit your movement abilities at first, but that will likely change due to upgrades from the RPG game mechanics at play – though whether the RPG system’s progression is linked to player stats or items such as weapons and armour is yet to be seen. You’ll find rare, new items on the way, one example being the fabled boots of Hermes, presumably gifting Fenyx a welcome speed boost.As you venture on this epic journey you’ll be accompanied by the narrator of the story, legendary author Homer. I was told Gods & Monsters opens with Homer sitting by a roaring fire, regaling his grandchildren with the tales of how a young hero, caught in the middle of a battle of Gods and monsters, saved the world. When asking Dumont if this style of storytelling was influenced by the audio narrative devices displayed in Supergiant’s Bastion, I was met with a simple nod of the head.

If you buy something through this post, IGN may get a share of the sale. For more, read our Terms of Use.
Also check out the PS4 Days of Play Sale, Xbox Deals Unlocked Sale, and Nintendo E3 2019 Sale.

This sounds very promising, it’s frankly mind-boggling that, since Bastion, no major game has attempted to tell a video game story in this way. If executed correctly, it promises to be highly effective in building out Gods & Monsters’ extensive open world – a world we’re told is several times bigger than Assassin’s Creed Syndicate’s, but not quite of the scale of Odyssey’s. In the small slice of in-development gameplay that I got to watch, only the lush grasslands seen in the reveal trailer could be seen. Much more variety is promised, however: different biomes exist on the map, as well as the cavernous depths of the Greek underworld, complete with its customary air of quiet death.

Ubisoft’s ‘Most Open Game Ever’

Ubisoft Quebec has confirmed that there is no prescribed order of tasks when setting out to complete Gods & Monsters’ story, and describe it as their “most open game ever.” Some may say that it comes across as a bit too close to Link’s last outing and I’m sure the term “rip-off” will be heard regularly from the more cynical set, but to be perfectly honest, that all sounds good to me. It looks like the rich, exciting ocean of mythology that Ubisoft dipped its toes into with Assassin’s Creed Odyssey is being fully dived into with Gods & Monsters. That tapestry of tall tales and breathtaking beasts, combined with the core mechanics of a Zelda game and the excellent plot devices pioneered in Bastion promises a lot. Here’s hoping it all comes together and manages to establish Gods & Monsters as a unique experience in its own right.

Simon Cardy is a video producer for IGN in the UK and he can’t wait to spend long tube journeys fruitlessly cutting off the heads of the Lernaean Hydra. Follow him on Twitter.

Company of Heroes on Steam