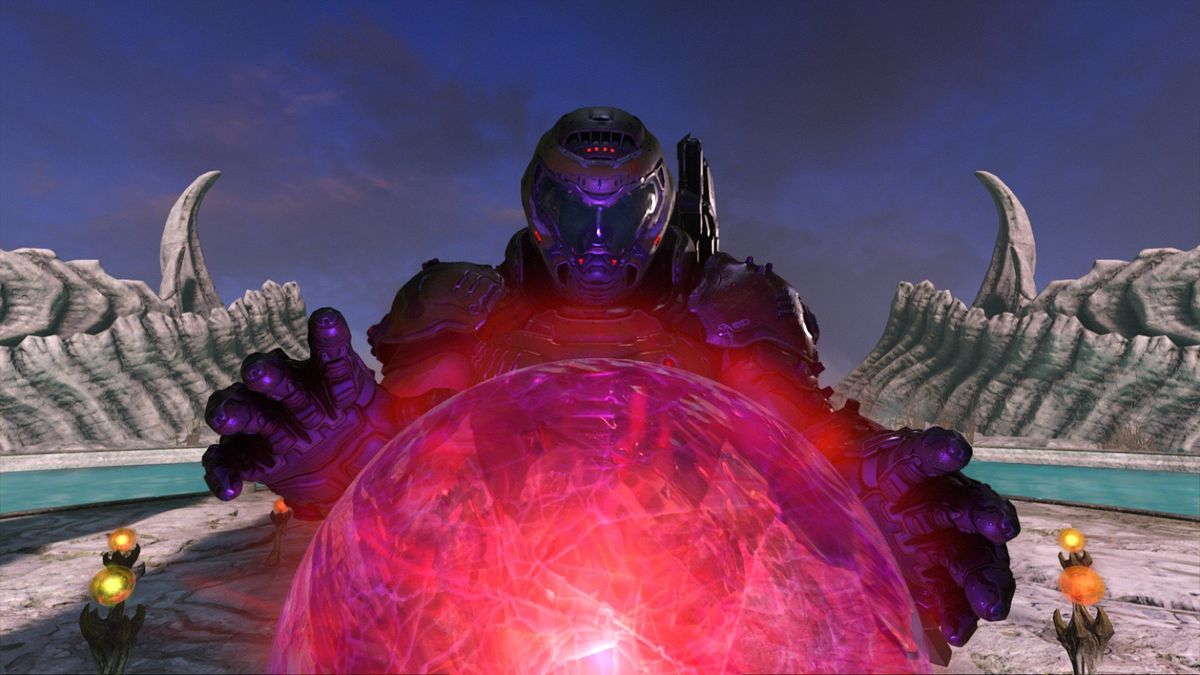 If the Doom Slayer is a race car, as id Software has described him, then The Ancient Gods – Part One is a series of victory laps around three new courses. It picks up right at the finish line of Doom Eternal, and the experience is akin to waking up at the wheel of a Ferrari screaming down the track at 200mph. It’s precisely as alarming and exhilarating as that sounds.

You inherit the Slayer plus all the extras, souped up with weapon mods and ability runes picked up during Eternal’s original campaign. And despite having completed it, I spent the first 20 minutes thoroughly embarrassing myself, thumping at a reload key that doesn’t exist and never has. It’s the shooter equivalent of flicking into sports mode and realising you’ve activated the windscreen wipers instead.

id Software, like the Slayer, is at the height of its powers. 2016’s Doom saw the studio reinvent the wheel—quite literally, building the game around spinning arenas that set you in constant motion. Ever since, it’s been coming up with inventive ways to thrust a stick in the spokes, tripping up players by disrupting the formula.

Doom Eternal’s most notorious example was the Marauder, a relentless runner who pursued the Slayer like a shadow, if your shadow owned an axe and a bright-orange attack dog. He returns in The Ancient Gods, and exemplifies id’s trend towards enemies who can only be defeated in highly specific fashion. Take the Turrets, new fixed placement shooters that appear like miniature Eyes of Sauron. A couple of shots through the scope of your assault rifle will burst the orb—but take too long during targeting and the ball will retreat inside its pillar, surviving until you can loop around for another try.

Then there’s the Spirit, which makes a ghostbuster of the Slayer. Mostly invisible, you’ll know it by the blue aura that encircles its host—as well as the super-speed, hyper-aggressive assaults on your person. Once the host is killed, the possessing Spirit bursts out, and you have a few seconds to zap it with the plasma rifle’s microwave beam. That would be an easy enough task were it just the two of you—but in Doom, you’re always surrounded. If you’re tardy with the beam or get distracted, then the Spirit will hop into another host and you’ll have to begin again.

You would think this kind of step-by-step enemy disposal would trap you into a process—as if shooting by instruction manual. But the Spirit presents more tactical choice, not less: do you focus your firepower on the host, and hope you can follow through with the plasma? Or demolish the most powerful demons on the periphery first, ensuring there are no large homes left for the ghost to haunt?

The Turret is a sign that the membrane between Doom’s fight and exploration phases is weakening. While huge arena fights still provide the punctuation of each level, new threats conspire to push you through the intervening corridors. In the festering Blood Swamps, battered by acid rain, pustules rise from the sodden earth. They bulge as you pass, and blister with a roar if you hang about, causing damage. The rising fog hurts, too, pushing you to keep pace in a Prince of Persia-style platforming puzzle. And remember those annoying tentacles in Doom Eternal? Their gigantic sister lives here, and she heard what you said.

The membrane between Doom’s fight and exploration phases is weakening.

As a consequence, The Ancient Gods is Doom at its most oppressive and intimidating. If there’s little respite outside combat, you certainly won’t find any in the centrepiece battles, where id holds an occult candle to your arse until your pants start to singe.

There were moments, after several minutes in the mosh pit, where the appearance of a chainsaw-endowed Doom Slayer or two towering Tyrants or three Barons of Hell left me buckling emotionally, not knowing how I’d keep up the act that I was the Slayer, the only thing the demons fear. The truth is that The Ancient Gods regularly frightened me with its intensity.

Ironically, only the Marauder provides the closest thing to a break—despite its first appearance triggering an involuntary, out-loud “oh no”. It now triggers the strongest muscle memory, and its patterns are so predictable they’re almost comforting in a storm.

If both the imps and the Slayer are quaking, pun intended, the only truly fearless party involved in The Ancient Gods is id Software. Unbowed by the naysayers who objected to jumping sequences and lore, it’s pushed forward with both. This is no side story, delivering critical blows to major characters from the past half-a-decade of Doom, while artfully consolidating new additions to keep things simple. There’s even some meta-comedy, courtesy of a UAC intern who has a direct view of your HUD and its revelations.

It’s hard to complain that Doom has plot when it results in environments like The Holt, where digital plant life blooms against the backdrop of a bloodsoaked forest; where, if you chip away at the bark of the trees, it reveals gold beneath. Heaven has done right by id’s art department.

The biggest worry going into The Ancient Gods was that Doom’s momentum might be stalled by the absence of Mick Gordon, its composer since 2016, whose hell choirs and industrial crunch have become as central to the series as the Super Shotgun. It’s a fitting compliment to Gordon’s work that he’s been replaced by not one man, but two—and while there’s nothing as striking as BFG Division soundtracking the Ancient Gods, Andrew Hulshult and David Levy do an admirable job of matching Gordon’s pulsing, downtuned precedent.

The Ancient Gods – Part One is a virtuostic display from id Software, then, and asks the same from you. The only question is how far it makes sense to turn up the temperature. After finishing these three campaign missions on Ultra-Violence difficulty, I was so exhausted I couldn’t quite tell whether I’d enjoyed myself—synapses fried by sheer mental and physical challenge.

Europe at War mod for Company of Heroes: Opposing Fronts

Superhot: Mind Control Delete is a bizarre, relentless take on the series’ themes