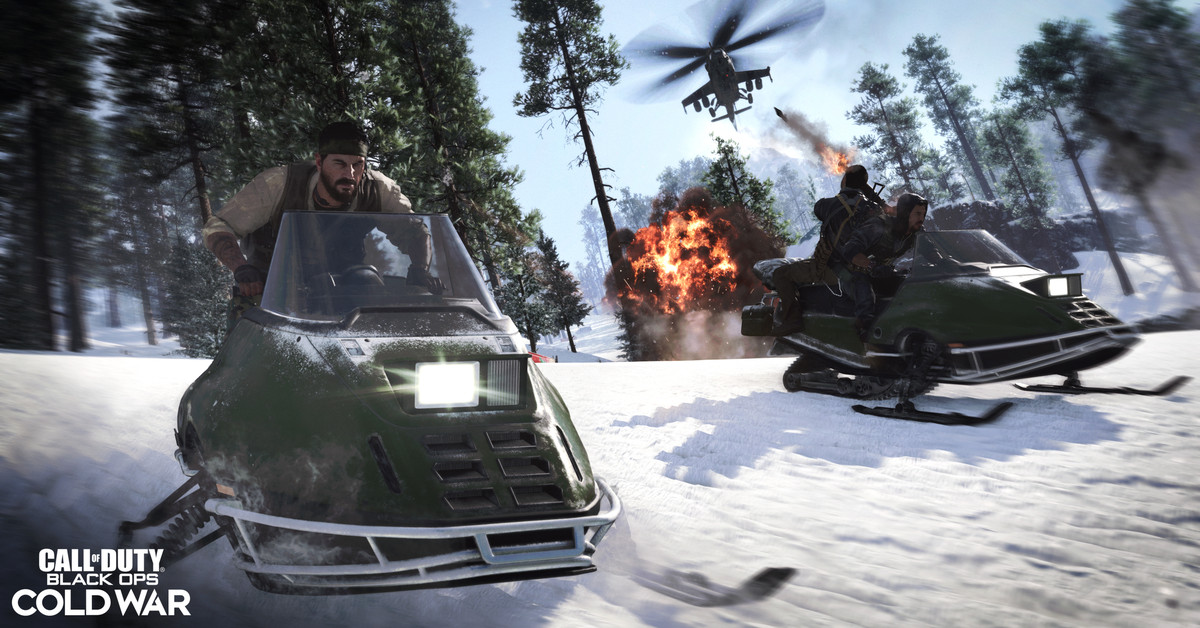 It’s impossible to discuss the new Call of Duty game without mentioning its size. The sheer magnitude of the software, in total gigabytes, has become perhaps the most defining and talked-about aspect of the long-running shooter series since the reboot of Modern Warfare last fall and the launch of Activision’s Warzone battle royale a few months later.

And it’s only growing larger. On PS5, the latest installment, Call of Duty: Black Ops Cold War coupled with Warzone, exceeds 250GB. That is nearly half the available free space of the built-in solid-state drive of Sony’s new console. But that huge file size is more than just a joke: it’s indicative of the state of modern Call of Duty.

The overall bloat of the experience has become both the franchise’s central selling point and its biggest flaw. In a bid to create the do-everything shooter that can compete with Fortnite and other live service games, Activision and the many studios it tasks with making a new Call of Duty every year have created something so monstrously all-encompassing that it is difficult to both literally and figuratively fit other games into your rotation.

That may be the point. I have friends who aren’t playing Black Ops Cold War and who gave up on Warzone months ago because they were tired of making space for the software and no longer feel like making storage management part of their daily gaming routine. But for those who buy in and sacrifice huge chunks of their hard drive and free time in the process, Call of Duty: Black Ops Cold War has a little something for everyone — enough, at least, to keep you hooked well into next year when the next installment arrives.

We’re past complaining about the cyclical nature of Call of Duty. It comes out every year, almost always breaks sales records, and keeps chugging along, unphased by real-world conflict and aimed squarely at the type of person who likes to shoot guns fast but also occasionally in slow motion. It is a video game that knows what kind of experience it is. That, in turn, makes it a product with healthy consumer demand that will likely never go away so long as the human brain keeps responding predictably to the feedback loops it creates.

But last year, Call of Duty became something altogether different. Activision yanked its most successful, formulaic moneymaker into the future by tying it together with a fully baked battle royale mode, Warzone, now one of the most popular on the market. The company promised an ever-evolving Call of Duty that could remain a stable fixture by adding what it needed and subtracting what it didn’t as the annual cycle progresses. Now, a year later, we have Black Ops Cold War, the first fully realized version of this vision of a live service Call of Duty.

Understandably, it’s kind of a mess as a holistic product, but much more impressive in its individual parts. The challenge now is deciding whether this modern structure for Call of Duty — in which it wants to be the only multiplayer game you play, like Destiny or Fortnite — is worth the time, effort, and storage space it will cost you.

The campaign isn’t much of a departure from the high-octane, set piece-driven experiences we’ve seen before. But it does have enough narrative surprises and experimental sequences to satisfy the Black Ops series’s history of twisty, conspiratorial storytelling. Unlike last year’s Modern Warfare reboot, which borrowed some of the muted and murky undertones of wartime thrillers like Zero Dark Thirty, Black Ops Cold War tries its best to blend together different pop culture elements all loosely reminiscent of a 1980s-inspired action movie. The result is about as close to a James Bond-style campaign as Call of Duty will ever get.

The campaign is most enjoyable when you’re not shooting — though those moments are brief. The standout mission is a stealthy Hitman-style “choose your adventure” escapade as a KGB double agent in which you don’t fire a gun until the final sequence. It does a great job showing you the kind of game Call of Duty could be if its designers felt compelled to commit to one theme instead of just experimenting too briefly with many. I was also disappointed to see truly savvy cryptographic puzzle-solving restricted to just a pair of optional side missions, though I applaud the developers for giving players some agency to choose which missions they played and in what order.

Multiplayer is the tightest and most impressive it’s ever felt, thanks to next-gen consoles

But as is the case with every Call of Duty, the campaign is there to satisfy a small fraction of the game’s intended audience. Many players might never touch it. The multiplayer is what draws in millions of people each and every year, and it seems the draw, increasingly, is not in actually enjoying it so much as in debating whether it’s worthy of scorn or praise. Call of Duty fans love to have strong opinions on whether any new iteration of the series’s multiplayer can re-create the addictive allure of Modern Warfare 2 or Black Ops 1 or whatever iteration of the game stands tall in their minds.

I will say, as someone who has played almost every Call of Duty entryfor more than half of my life, that Black Ops Cold War is perhaps the tightest and most impressive the game has ever felt. Part of the reason is because it’s been optimized for the PS5 and Xbox Series X / S. I’ve greatly enjoyed the game’s multiplayer on 120Hz mode on Sony’s new console, where it feels like the smoothest and most immersive shooter I’ve ever played. I also found that the game’s more stripped-down class customization and weapon modding to be easier to digest and more accessible, meaning I’m spending less time obsessing about which attachments to use and more time just experimenting with various loadouts.

There is, however, quite a bit to complain about. The multiplayer contains under 30 weapons and none feel particularly interesting or all that different from one another. There are only eight multiplayer maps, some of which I hated for how convoluted and camping-friendly they are and dreaded playing on every time they’d inevitably end up in the rotation. The game also has a throwback feel to it, where your character moves slower and the time-to-kill is longer than last year’s entry. That gives it the feel of an older, stodgier shooter — much more like the Black Ops games of old. The fast-reflex Modern Warfare camp might find that too jarring to enjoy, and I’m only now getting used to it tens of hours later.

Surprisingly, it feels like all of the best new ideas and creative energy in Black Ops Cold War went into the zombies mode. And that makes sense: zombies is now more of a signature pillar of the Black Ops brand than any of the campaign characters or storylines. Zombies could very well be a whole game on its own, and one might wonder why Activision doesn’t spin it out already — except that it gives millions of players a strong reason (perhaps the only reason for some people) to buy a new Black Ops entry when it comes out every two to three years.

The mode is fast-paced, fun, and filled with secrets to uncover and puzzles to solve. It’s perhaps the most refined modern take on the horde mode formula from a major studio I can think of. It’s likely to be the reason why so many players still keep this game installed well into next year and possibly even beyond the inevitable release of the next title in the series, which presumably will not contain a zombies mode.

Call of Duty is never a commercial failure — it always sells — but that doesn’t mean the developers who make it can’t fail in their attempts to make the best experience possible. My main issue with it now is not that any one of these new modes is subpar, but that they all feel like the disjointed limbs of a Frankenstein video game. Black Ops Cold War is overflowing with content and covers seven distinct console hardware types, a PC version, and a battle royale, all of it taking up more storage space than pretty much any other game in history.

This is supposed to be freeing — play the new Call of Duty on any platform with any of your friends and only the game types you enjoy. And to a large extent, the cross-gen and cross-platform functions work well and Activision should be applauded for the sheer complexity of the technical feat it pulled off weaving this all together. (A planned Warzone update next month is scheduled to merge the battle royale with Black Ops Cold War, which may not go as smoothly.)

But when I boot up Black Ops Cold War, I find that I’m not so much drawn to any one part of the game as I am overwhelmed by the whole package. It feels like four games all competing for my attention, not to mention all of the extra legwork figuring out who I’m playing with on which platform and whether I have the right mode installed.

I’ve lost count of the many times my friends and I have agreed to try something new in both last year’s Modern Warfare and this latest one, only for one of us to admit they didn’t have the right multiplayer pack installed or they only downloaded the zombies mode and deleted Warzone to save space. So we give up.

It’s an exhausting affair unless you’re willing to make Call of Duty your one and only shooter. And Black Ops Cold War just isn’t good enough to justify what it asks for in return.